Milou Ettekoven and Marcella Koek continue their ascending road.  Yesterday they claimed championship at the Playtomic/Tibeflex Open FIP 250 in Gent, Belgium for the international padel circuit.   In the final they defeated WPT player Helena Wyckaert who partnered with rookie Elizabeth Wyckaert by a convincing 6-2 6-3.

“…it was a very nice tournament… I enjoyed playing against Helena Wyckaert. She is a very good player”, according to Ettekoven. 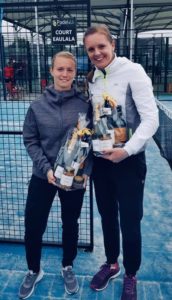 Ettekoven and Koek benefited from a “Bye” in the first round and W.O. in the quarterfinals.  In the semi-finals they faced Marie Maligo and Laura Bernard.  During the first set, the Belgians benefited from an early break to finish 4-6.  In the second and third set, the Dutch dominated the red devils, for a final results 4-6  6-2 6-2.

With this result, the Dutch no.1 ladies continue to improve and hope to finish on a high note at the end of this year during the upcoming European Padel Championships.

Other Dutch participants included Yvonne Peeters and Cindy Huberts, who lost against Belgian semi-finalists Jesse Brouwers and Shana Oyen 6-7 6-7.  Amazingly, right handed Huberts played all tournament with her left hand due to an injury on her right shoulder.