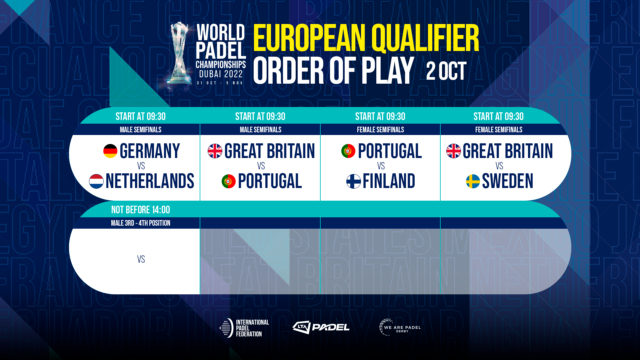 Yesterday Holland left Finland behind with a final score of 2-0.  Today, for the semi-finals of the World Championship Padel Qualifier, Holland will play against Germany.  Both teams have a rather long history of confrontations. Most past matches were won by the Germans, except during the 2014 Qualifier for the Mallorca World Championship. Then the Germans were nearly left out of the competition.

Today things look similar as in the past.  The winner of this semi-final match will receive a ticket to play with the elite of padel in November and the final of this qualifier tournament against most likely Portugal (or UK). The looser will get another chance to fly to Dubai by playing for the third final ticket against the UK (or Portugal). Note that both the UK and Portugal are stronger teams than Holland. Defeating any of these teams will be a difficult task.  So, it all falls down to winning right now against Germany.

Both teams have similar levels of play. The final result will be decided mostly by their ability to play under pressure. Expect highly emotional matches, full of adrenaline, shouting and unforced errors. All players know that they are competing on a nearly all or nothing chance to go to Dubai.

The match is being broadcasted live at FIP International Padel Youtube channel, starting at 9.30 GMT.