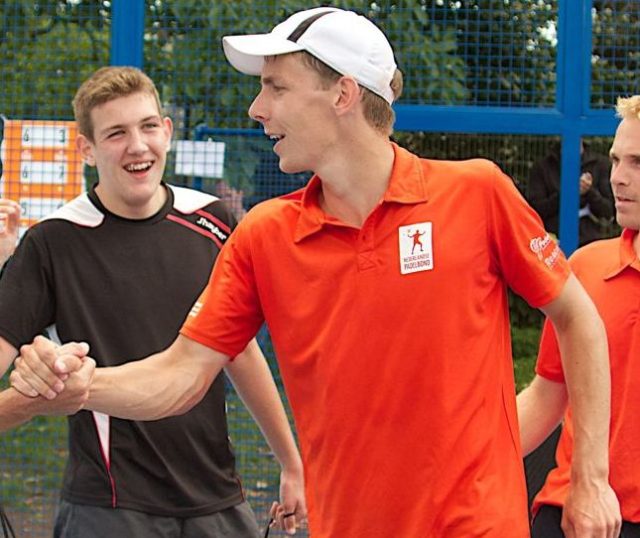 Continuing with a series of interview to participants of the 1st Dutch Padel Open.  He is a young talented padel player, gifted with a strong and fast right arm. Just imagine, Joost is also known as El Bombardero de Oldenzaal -The Bombardier of Oldenzaal-.

Below you can read a short interview with Joost Snellink:

How did you first hear about padel?
I heard about padel almost two years ago. We started playing it at the courts of TEZ Enschede. Coen (Beltman), already member of the Dutch Padel team at that moment, made us more enthusiastic and introduced us at the selection days of the Dutch Team. From that moment on, we play padel very frequently.
How did you learn how to play?

I learn how to play at the trainings of Norberto. Besides that, watching videos on the internet about tactics and techniques are really helpful. But still, the most important thing is to train as much as possible. Last year we played a lot of matches in Germany against players who were better than us at that moment. We increased our level a lot by playing these matches.

What do you think your level is?
My level is quiet good if you compare it to other players in the Netherlands. That is probably the reason why I am a member of the Dutch Team. Of course, the level of play in neighboring countries is much higher. I am a moderate player compared to these standards.

Who is your teammate in the dutch open and what are your chances?
My teammate at the Dutch Open is the one and only Berend Boers. He is just back from a bad injury. For that reason we are both very eager to play good in the tournament. I do not think that we are the absolute favorites for the title, but at least we are a good outsider for the title. Our goal is to reach the podium of the Dutch Open.
How do you see your future with Padel?
The short future with Padel consists of a tournament in Enschede, Köln and Gent. We want to qualify the Dutch Team for the World Cup on Mallorca in October. In the long run I want to be a better player. We shall see what that means and where it all ends.