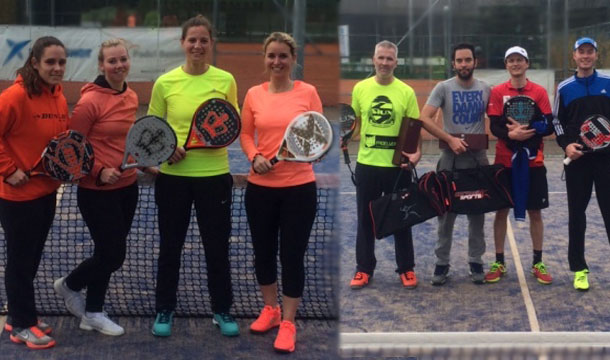 Fifty participants competed during 20-21st March in the panoramic Padel Courts of Coronel Sports in Huizen for the Huizen Padel Fip 100 Championship.
Padel players from eight countries, in two categories, battled under the cold and rain to delight the curious visitors, many of which, saw international padel for the first time.

For the gentlemen category, the tournament progressed from the begining to the final without surprises as seeds moved forward to meet in the final. During the championship match, the second seeded Kristopher Sotiriu (AUS) and Darek Nowicki (GER) defeated the no. 1 ranked player in the Dutch circuit Peter Bruijsten (NED) and Maxim Gravech (SPA) 6-2 6-3. “Even thou I played with a very good partner from Spain, we could not deal with the fast pace game imposed by our opponents. Congratulations to Darek and Kristopher”, said Bruijsten.  The counterside of the Dutchman disappointment was Nowickis sense of accomplishment. “… it was our first outdoor tournament in the season. It was not easy to play the first matches, but we are happy about our performance in the final”, said  Nowicki.

The ladies category came full of surprises as the no. 1 ranked Wendy van Eijk (NED), who teamed up with top ten Yvonne Peeters (NED), lost in semi-finals against the younger Jolien Hak (NED) and Eveliene Paashuis (NED) for a 6-1 2-6 6-1. The first set was all for the young girls as Eveline explained “…it went super well. We simply made no mistakes”.  The second and third set were very unpredictable as nerves and stress played a bigger role.

During the final the young Hak-Paashuis continued their winning streak to defeat the experienced Sabine Schutelaar (NED), who won the La Playa Padel Tournament earlier this month, and Pamela Van Boekel (NED) for a tight 7-5 6-4.   Jolien Hak was excited about winning this tournament, which is her first in the Dutch Padel Circuit. “Because we knew our opponents well, we came prepared with a good plan. It worked!”

The tournament was organized by the Nederlandse Padelbond in partnership with International Padel Federation (FIP) and Coronel Sports.