Are you looking for Padel Tennis?  I must disappoint you.  Padel Tennis does not exist.  It never did.  There is no Padel Tennis Federation or officially documented information of any such Padel Tennis sport.  But why and where did you hear about Padel Tennis then?

There are three racket sports whose names are similar and easy to confuse.  Paddle Tennis, Platform Tennis and Padel –or Paddle-.   There are plenty of commonalities in their rules and they all have roots in Real Tennis –the old grandfather of all racket sports, including modern lawn tennis-.  In some cases, they utilize similar rackets.

It is a sport adapted from lawn tennis and played for nearly a hundred years.  It is credited to Frank Peer Beal, a priest from lower Manhattan, USA.

Frank’s original intention was to facilitate for kids to play more sports.  In 1915, in partnership with local government, he constructed some courts in Greenwich Village.  Afterwards, he started inviting kids to try his newly created racket sport.  In light of the fast adoption, a group of enthusiasts organized the first tournament in 1922 and created the United States Paddle Tennis Association in 1923. By 1941, it was played in over five hundred American cities.

Since then Paddle Tennis continued to evolve with the help of Murray Geller.  Murray concentrated his efforts in updating the sport and making it more attractive to adults.  Among other changes, he implemented an underhanded serve and a bigger court.

Nowadays Paddle Tennis is played both indoor and outdoor.  The court is significantly smaller than a tennis court.  The sport has no doubles lanes and the net is rather low. It can be played in single or doubles with a solid thin racket and a spongy softball.  The doubles format  is more popular than singles thou.

Paddle tennis is played mostly in Southern California, Florida and New York by about 25.000+ players. 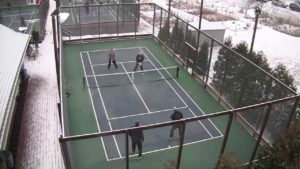 Platform Tennis is somewhat similar to Paddle Tennis.  It was invented in 1928 in Scarsdale, New York by James Cogswell and Fessenden Blanchard.  Cogswell and Fessenden had been seeking to develop a sport that could be played outdoors during the winter on land unsuitable for tennis courts, for example along hills.

One of the biggest differences is that a Platform Tennis court is nearly two meters smaller than a Paddle Tennis court –for a total of about 1/3 of a tennis court- and it is fenced by chicken wire.   The ball is similar to the paddle tennis sport -sponge rubber ball-. During the rally, however, it may bounce on the fence –similarly to squash-.

Overhead serving is permitted.  The ball is struck with a paddle racket that extends 460 mm and which may have up to 87 holes to improve its aerodynamics.  Courts are typically raised, outdoor and heated from underneath for convenient winter play.  The scoring system is the same as in lawn tennis.

This may be the sport that you are looking for.  According to the International Padel Federation, Padel was invented by Enrique Corcuera in 1962. Originally, the sport was called Paddle Corcuera.  In time, the name was abbreviated to Paddle.  Later, as it became adopted in Spain, the word “Paddle” evolved into a another more suitable for the Spanish language: Padel.   In South America they mostly still called it by its orginal name Paddle whereas in Spain it is Padel.

Corcuera’s original intention was to build a “Fronton”, an Hispanic entertainment sport.  Players hit a ball in the direction of a wall and continue with the rally for as long as possible. Later on, he built another wall behind the player’s standing position to prevent loosing the ball. Players had then a wall both in front and behind. Finally, he introduced a net in the middle of the court and short walls at the sides. Players faced one another instead of playing in the direction of the wall.

Initially Corcuera and friends used rackets designed for Paddle tennis or Platform tennis.  For for example, the legendary and heavy wooden made “Marcraft” rackets were popular at the time. These rackets weighted over 450gr, produced a lot of vibration and noise when impacting the ball.

The scoring was a simple account of points, from 0 to 21. He experimented with different types of balls and finally adopted low pressure/small size tennis balls. The first rule book was put together by Enrique’s wife, Viviana, former Miss Argentina, who gave it to his husband as a birthday present. Padel has evolved and changed significantly since the old days.

Nowadays the sport is played in over 70 countries by more than 10.000.000 players.  Padel is played in an enclosure of glass or concrete with iron mesh.  The court is 10×20 meters big.  It is played in doubles format only both indoor and outdoor.  The counting system is the same as in lawn tennis.  It is arguably the fastest growing sport in the world.

So why Padel tennis then?

In some regions or countries, in an effort to market the sport, people call Padel –or Paddle- Padel Tennis.  It is simply an effort to better explain what this sport is about and it makes sense. The word Padel is indeed strange for a racket sport.  Instinctively, more often than not , people relate the word padel –or paddle- to water-sports.

In conclusion, Padel Tennis does not exist.  According to the International Padel Federation, however difficult or exotic it may sound, this racket sport is officially called “Padel”.