World Padel Tour (WPT) is the professional international padel circuit.  The best padel players in the world compete in nearly fifteen padel tournaments per year in more than five countries, including Spain, Argentina, Brazil, Sweden and Portugal.  It was founded in 2013. The tournaments are broadcasted live via Youtube streaming and in Spanish TV.

History of the World Padel Tour

The Padel Pro Tour was a professional padel circuit that preceded the World Padel Tour.  It was founded in 2005 by agreement between the Association of Professional Padel Players (AJPP), Spanish Association of Female Padel Players (AFEP) and a group of four tournament promoters that included Vision Events SA.  The tournament promoters operated and organized the weekly or bi-weekly competitions.  The Padel Pro Tour followed the previous professional circuit, the Beefeater Circuit.

In 2013, the current owner of the WPT, Set Point Events SA and Damm SA, approached the most influential padel players of that moment.  WPTproposed to create a new professional circuit that would be more beneficial to the participant players.  After multiple conflicts and negotiations between the players and Padel Pro Tour, the AJPP decided to abandon the previous circuit.  They moved move forward with the proposal to build the World Padel Tour.

Since then, the World Padel Tour evolved from a small but promising circuit into a modern and professional sporting event with well-polished operations, good branding and TV broadcast.

The World Padel Tour circuit is the premier world padel competition both for men and ladies.  It comprises fifteen to twenty tournaments per year of different sizes and categories.  It includes Challengers, Open, Masters and Master Final.  Participant players accumulate ranking points that reflect their performance in the competitions and determine the participation in the Master Final event. Only the best eight teams in the ranking participate in the closing Master Finals.

Spanish company Setpoint Events SA, a subsidiary of the DAMM group of companies, is the circuit owner and operator.  It regulates all events and establishes organizing standards for all stakeholders, including players, sponsors and broadcasters.

Since its humble beginnings, the World Padel Tour has grown in size and influence.  Today their YouTube channels accounts for more than two hundred thousand subscriptions that follow live broadcasts and short clips.  Semi-Finals and Finals are available live in TV.

The number of participant players has grown exponentially.  In the recent months it has  gotten more colorful and international with more than fifteen players nationalities represented.  Some of the are the all mighty Argentina and Spain, as well as others such as France, Portugal, Italy, Belgium, Germany, Brazil, Mexico, Venezuela, Austria, Uruguay, Chile, Sweden, The Netherlands and UK. At times more unfamiliar flags take over the court, including China, Lithuania, Japan and Poland.  With regards to locations, the circuit continues to expand, with events taking place in traditional Spain plus Portugal, England, Sweden, Belgium, Brazil and Argentina.

Thou padel is a fast growing sport, the price money for the professional level tournaments is not on par with other sports.  For the male category, the Masters tournaments the circuit distributes €105.000, €91.000 for the Open and €17.500 for the Challenger.   Sadly, the ladies earn 40% than the men.

In 2019, the World Padel Tour and the International Padel Federation (FIP) announced a relevant agreement that facilitated the further expansion of the professional circuit through the addition of lower tier tournaments operated by national FIP member country federations.  The lower tier includes FIP Star, FIP Promotion and FIP Rise. Thou they distribute much lower ranking points than the higher level WPT tournaments, they serve a further purpose. One the hand, it brings the World Padel Tour closer to amateurs and semiprofessionals outside Spain.  On the other, it brings a relief to the overly populated prequalification rounds of the World Padel Tour by offering non-Spanish players an alternative to gaining the always tough to get World Padel Tour ranking points.   Additionally, the agreement unified the FIP and World Padel Tour ranking.  It brought clarity to the world.

Lamperti, Matias Diaz and Pablo Lima.  They are followed by a legion of ascending young talents such as Juan Lebron, Federico Chigotto, Alejandro Galan, Juan Tello and Agustin Tapia.    As for their nationalities, the Argentinians continue to dominate the top 20 positions, followed closely by the Spaniards.  In the recent times, Brazilians lead by Pablo Lima increased their representation among the top 50.

With regards to the ladies, Spain is the leading land at the top of the chart.  Out of the top 20 players, 16 are Spanish, with only three representing Argentina and one playing for Portugal.  Former tennis player Marta Marrero, Marta Sanchez, Alejandra Salazar, Ariana Sanchez, Carolina Navarro, elisabet Amatriain and Maria Jose S. Alayeto are among the most followed.

A growing number of brands are choosing to associate to the World Padel Tour.  The pool of sponsors and advertisers include today numerous A-Brands, such as Volvo, Cupra, Head, Adidas and Lacoste.  They are joined by Spanish national brands El Corte Ingles, Estrella Damm and Adeslas. 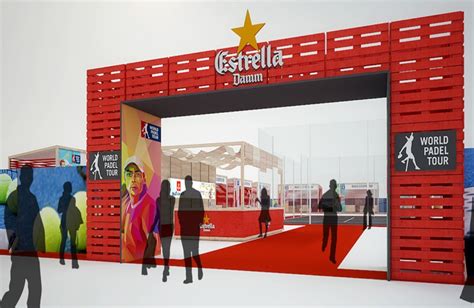 But not all has been positive for the WPT. The circuit has been under scrutiny for arguably not investing an equal amount of efforts in developing ladies Padel. In 2018, the World Padel Tour responded by creating a W Tournament for ladies only.  However, the earnings gap between the men and women remains a concern.

Additionally, critics argue that the dominance of the Estrella Dam beer sponsor prevents the arrival of other companies.  Other brands may not be willing be placed on the side of an alcoholic drink.

World Padel Tour into the Future

Padel is considered among the fastest growing sports in the world. The professional circuit World Padel Tour should follow . It will continue to expand to new countries in Europe, Latin America and eventually Asia.  It should be no surprise to see Padel tour events in France, Belgium and Italy in the near future.  The tour will attract new sponsors and evolve to become perhaps the most spectacular racket sport to watch on TV